The event was supported by Malaysian Muaythai Association (PMM) and the Sarawak State Education Department.

Master Borhan Budong which is also the IFMA Virtual Championship 2020 ITO was the chief referee for this year’s tournament.

Among the several categories supported by the education department were Wai Kru and Shadow Box. Muhd. Mikail Ghazali Zulfikar emerged as championin the men’s A category after he defeated Dylan Casey Daniel. The men’s B category title went to Muhd Johan Ghazali Zulfikar who tamed Mike Bryan Jefni. For the senior men’s category, Jordan emerged champion after he outwitted Morris Hii Zhen Wei. Dolphina Walter Tony was the winner in the women’s senior category. She thrashed Rebbeca Racha Liban for the title. The female B category was won by Nur Arifah Mahsunah Baharom.

PMNS president Jumaat Ibrahim said competition was held to promote Muaythai and also to hunt for youngsters who have potential in the art. Jumaat thanked Sarawak Sport Corporation(SSC), Sports Council (MSNS), Sarawak State Education Department, Sarawak Youth and Sports Department (JBS), and PMNS staff for their efforts and support in ensuring the tournament was successfully organised.

Dato Shahnaz Azmi President of the Malaysian Muaythai Federation and IFMA Executive Board Member stated: “it is the Malaysian policy which is very much in line with IFMA’s to mitigate physical inactivity and sedentary behaviours and health related risk during this pandemic where schools and gyms are closed and cities are under lockdown. And to give the youth a chance to interact and train with one another.”

Malaysia is looking very much forward to the second round of the virtual championships later this year. 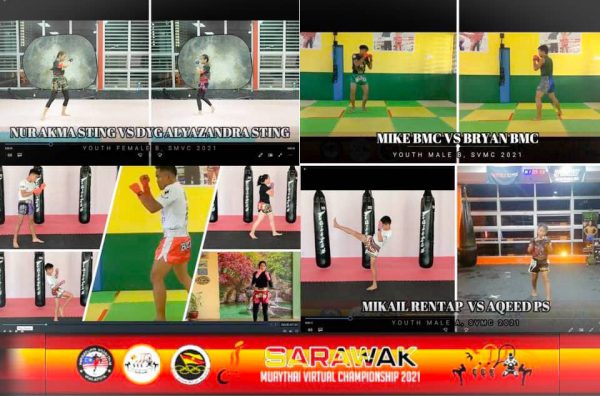