The International Federation of Muaythai Associations (IFMA) began as a small federation with several enthusiastic countries, more than two decades ago. After the passage of the initial stages of its life and at the dawn of an exciting new century, IFMA had grown to 130 member countries worldwide with 5 continental federations, together existing under a single, unified regulatory body. IFMA accepts and recognises the mission and roll of the International Olympic Committee (IOC). IFMA will always conform and respect the Olympic charter, adopt the code of ethics based on the principles of the IOC. 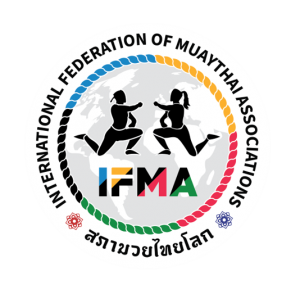 The fundamental principles of Olympism include sustainable development of sport, the education of youth through sport and recognition the practice of sport as a basic human right. To that end, IFMA’s mission is that every individual must have the opportunity to practice Muaythai free of discrimination of any kind be it racial, gender, sexual orientation, religious or political and IFMA will continue its work toward this right and freedom for all.

IFMA has established various commissions to oversee and develop on areas of social responsibility, universality, ethics, youth and education, prevention of competition manipulation and activities for all. The commissions liaise with stakeholders of the Olympic movement to ensure the adherence to the Olympic movement, code of ethics and function with transparency and good governance.

Muaythai through IFMA has come a long way since its first World Championships held in 1993 where a mere twenty countries participated. In the most recent World Championships the participation was overwhelming with contestants and dignitaries from 101 countries in attendance. Another significant progression in the globalisation of Muaythai took place at the 1995 South East Asian Games when, for the first time since the inception of IFMA, Muaythai was included as a sport in which both genders could compete while representing their country over various different divisions. Since then muaythai has been included in official sport programme of many other Continental multi-sport Games such as the Asian Beach Games and Indoor Asian Martial Art Games and as a demonstration sport in the Asian Games in 1998.

1999 was a historic year for Asia as IFMA and Muaythai has gained recognition by the Olympic Committee of Asia. After 8 world championships in South East Asian, 2003 saw the IFMA World Championship held in Kazakhstan with 78 countries participating. In 2006 history was made, as Muaythai became a full member of the World Sporting Community with its inclusion in GAISF, today known as SportAccord. Thus, IFMA sits proudly alongside all other world-recognised international sport federations, as a recognised member of the world sporting family with unmatched access to knowledge sharing and resources via SportAccord.

2008 was another exciting year for Muaythai with the IFMA World Championships, which was a part of The Association for International Sport for All’s (TAFISA) World Sport for All Games (Busan, Korea) under the patronage of the International Olympic Committee (IOC). This raised the profile of Muaythai as an internationally recognised sport in particular through the activities of IFMA in promoting Muaythai as a medium for cultural exchange and to raise awareness of this aspect of the sport. IFMA values the importance of ensuring that muaythai, as a cultural heritage will be protected and will promote and foster all aspects of Muaythai regardless for health, fitness, self-defence or competition. IFMA’s slogan is “Muaythai for Every Body” and to develop Muaythai as a way of life.

Furthermore, IFMA was praised by luminaries such as representatives from the IOC for its work with children from marginalised or disadvantaged backgrounds by promoting Muaythai as a route for development. IFMA signed a Memorandum of Understanding with the Peace and Sport Organisation (L’Organisation pour la Paix par le Sport) in December 2010. This understanding between the two organisations is seen as a great step forward in the quest to continue making a difference in the lives of children through exposure to the sport, its values, culture and the traditions that are the core of Muaythai. IFMA also works in close cooperation with UN Women and signed an MOU to cooperate on the campaign the End Violence against Women (EVAW).

IFMA’s members are charged with the task of achieving recognition by their relevant national sport authorities and/or National Olympic Committees. IFMA assists its members toward WADA compliance at all times, and encourages its members to work and develop in areas of integrity and social responsibilities. To that end, IFMA aims at building up cooperation with recognised social institutions.

IFMA’s cultural exchange program involving kids from over 60 countries received the highest accolades from private and public sector IOC members. Such exchanges amongst others include Jamaica and Thailand where Thai children selected from theMuaythai Against Drugsprogram provided a demonstration alongside Jamaican children. This integration between the cultural exchange programs and the IFMA’s activities combating social ills is an important element in our objectives and will be aided by the future of our partnership with Peace and Sport. April 2012 marked the launch of IFMA’s latest social project in cooperation with the Peace & Sport Organisation, entitled “Sport Is Your Gang”; a project utilising Muaythai to improve the lives of disadvantaged and marginalised youths. After only two years since its launching Sport Is Your Gang has been given the highest award for social campaigns in sport – ‘Spirit of Sport’, the annual award from SportAccord that marks the greatest impact sport makes for the youth.

2010 marked yet another major milestone for Muaythai and IFMA with the SportAccord Combat Games under patronage of the IOC, in Beijing. IFMA’s Muaythai event received accolades from SportAccord and the Beijing Organising Committee for having the largest numbers of participants and spectators in attendance.

2011 saw the World Championship in Uzbekistan with 90 countries in attendance, which was praised as a festival of culture, friendship and sport.

2012 also saw the IFMA World Championship in St Petersburg, Russia with 92 countries participating and IFMA also receiving the honour of being the official test event for the 2013 World Combat Games.

The following year 2013 marked the inclusion of Muaythai and IFMA into the International World Games Association (IWGA) an IOC recognised organisation. The same year saw the 2nd edition of the World Combat games under patronage of the IOC and Muaythai had the highest viewing for any non-Olympic sport. The same year, history was also made when the Muaythai television show ‘The Challenger Muaythai’ was nominated for an international Emmy with over 400 million viewers around the world.

2014 was a truly successful year for Muaythai, with its inclusion in the official sports program of the World Games only 1 year after being recognised. Muaythai also won the Spirit of Sport Award for their outstanding contribution to society. The World Championship was held in Malaysia and Muaythai broke the 100-country mark with 101 countries participating. Furthermore, Muaythai was officially included in the Asian Beach Games, and after being the demonstration sport in the Asian Games, is now fully included in the Asian Indoor and Martial Art Games and the journey continues. That same year, IFMA signed an MoU with UN Women to collaborate on the UN Secretary General’s campaign UNiTE to End Violence Against Women and Girls and to advocate for gender equality.

2015 started immediately with the good news of FISU giving patronage to the first ever IFMA Muaythai University World Cup and history was again made in April 2015 when FISU officially recognized IFMA and included muaythai into the FISU World University Championship programme. 2015 also saw the IFMA Royal World Cup in Bangkok with a new record of 120 participating countries. IFMA, from 2009 – 2016 was also one of the 23 members in the Alliance of Independent Recognised Members of Sport (AIMS), one of the four umbrella groups in SportAccord. Currently, IFMA General Secretary Stephan Fox serves as President of AIMS.

2016 was an eventful year with the IFMA World Championships held in Sweden and World Cup in Russia while the European Championships were held in Croatia, the Asian Beach Games under the Olympic Council of Asia in Vietnam, the Pan American Championships in Peru and the Youth World Championships in Bangkok. An important MoU was also signed with UNESCO towards continued youth development, gender sensitivity, intercultural dialogue and implementation of the Quality Physical Education (QPE) guidelines in the IFMA educational platform. The IGLA Education curriculum was also launched this year, formalising and standardising the grading and teaching of muaythai worldwide. The programme is aimed at protecting the cultural and traditional aspects of the sport. Another achievement in 2016 was IFMA General Secretary Stephan Fox becoming Vice President of SportAccord.

To date, IFMA has organized 20 World Championships. IFMA prides itself on combining sport, education and cultural understanding. To that end, annual Congresses are held in major cities in cooperation with stakeholders from the Olympic Family.

On December 6th 2016, the IOC Executive Board granted provisional recognition to IFMA, which is testament to the work done by IFMA and its member National Federations towards protecting and promoting the Olympic values. This causes IFMA to move on from AIMS to becoming members of the Association of IOC Recognised Sport Federations (ARISF), joining all other IOC recognized sports that are not in the Olympic Programme. IFMA will continue to build on the 5 pillars of Muaythai that are: respect, honour, fair-play, excellence and tradition.

2017 is packed year in the IFMA calendar, with the World Championships in Minsk Belarus, which saw over 80 countries gather to see their athletes rise as champions. Muaythai, under IFMA also joined the world sport stage in the World Games 2017 in Wroclaw Poland, as a full medal sport. IFMA is also proud that Muaythai champion Sofia Olofsson took the prize for IWGA Athlete of the Year. The Youth World Championships in Bangkok broke youth participation records with over 1200 participants this year, from over 79 countries across all continents. The Championships featured an outstanding Youth Conference, and dazzling Awards Gala Night. Now Muaythai is geared up to feature in the upcoming SEA Games in Kuala Lumpur, the AIMAG in Ashgabat, and also the Pan-American Championships in Cancun this year.

2019 saw the revival of the Arafura Games in Darwin Australia, with muaythai being one of the most successful sports. The Senior World Championships came back to the motherland in Bangkok, the Chungju World Martial Arts Masterships in South Korea, the European Championships in Minsk, the Asian Championships in Abu Dhabi, Pan-American championships in Colombia, African Championships in Morroco and SEA Games in the Philippines. It was again the year of and for the youth with the IFMA flagship event, the Youth World Championships seeing an unforgettable edition in Antalya and the launch of the Bangkok Urban Youth Tournament. History was also made with the unification of the International Federation of Muaythai Amateur and the World Muaythai Council leading to the re-branding of the organisation into the International Federation of Muaythai Associations.

IFMA’s objective is to continue to strive for excellence in all aspects, to develop muaythai in every country in the world and by 2020 have at least 160 member federations.