The Indonesian Muaythai Federation, known as The Indonesian Muaythai Executive Board (PB.MI), is currently enjoying the new lights of leadership from its newly elected chairman, which also happens to be the chairman of Regional Representative Board of The Republic of Indonesia, the leader of Indonesia’s senators, Mr. Ir. Aa La Nyalla Mahmud Mattalitti. The Chairman was elected during PB.MI’s Extraordinary National Conference and won by acclamation after gaining the trust of PB.MI’s members.

The mandate is taken though not without protests. A lot of high government officials and political actors in Indonesia, dubbed the senator as “overqualified” to handle such position. According to their judgement, “A chairman of the senatorial chamber of the Parliament, is not supposed to take care of Muaythai, for it as an organization, is too small for La Nyalla to take care of directly.” To which The Senator simply replied, “I will make it very big then.”

La Nyalla’s statement may seemed like a bluff for those who doesn’t know his works and portfolio. The former chairman of Indonesia’s Football Association (PSSI), has proven his capability in turning over a branch of Sport in Indonesia, from mismanagement and lack of achievement, into an organization that is starting to show its better performances.

His followers in PB.MI believe, that La Nyalla is capable of turning Muaythai Indonesia into one worth contestant in International Competitions, and  that its fighters can be a worthy opponent, for the other countries’ fighters. Their motto, “Nyalakan Muaythai Indonesia”, which means “Light the Indonesian Muaythai”, is inspired for their chairman’s name, “Nyalla”, which can be interpreted as “To Light”. And it seemed to be that this national association is being well led because we can see that one of their first action after receiving their mandate is joining the IFMA, and actively do some initiatives to be a worthy member of the IFMA Family. 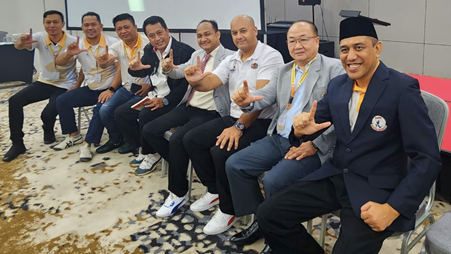