TWENTY-NINE ATHLETES COMPETING ACROSS 12 SPORTS AND FROM 13 HOST NATIONAL OLYMPIC COMMITTEES (NOCS) WILL BE PART OF THE IOC REFUGEE OLYMPIC TEAM (EOR) TOKYO 2020.

The athletes were selected from among the refugee athletes currently supported by the IOC through the Olympic Scholarships for Refugee Athletes programme. They will send a powerful message of solidarity and hope to the world this summer, bringing further awareness to the plight of over 80 million displaced people worldwide.

The chosen competitors, selected from a group of 55 promising refugee athletes from 13 countries that were given IOC scholarships, are set to compete across athletics, badminton, boxing, canoeing, cycling, judo, karate, taekwondo, shooting, swimming, weightlifting and wrestling at the Games. The list of athletes can be found here.

The squad, which features athletes from 13 host National Olympic Committees, includes six which competed on the first Olympic Refugee Team at the 2016 Games in Rio de Janeiro. 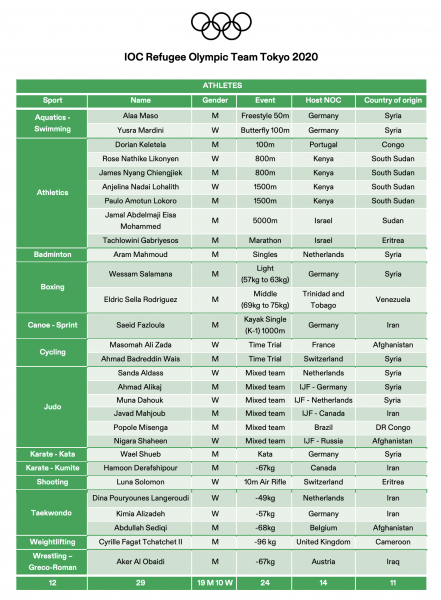 Alaa Maso is also set to compete in swimming, while Misenga is one of six judoka selected for the team by the IOC, joining Sanda Aldass, Ahmad Alikaj, Muna Dahouk, Javad Mahjoub and Nigara Shaheen.

The team is nearly three times the size of the 10-strong refugee team at Rio 2016, and includes 10 men and nine women.

Addressing the athletes, the IOC President, Thomas Bach said: “Congratulations to all of you. I speak on behalf of the entire Olympic Movement when I say that we cannot wait to meet you in person and to see you compete in Tokyo. When you, the IOC Refugee Olympic Team and the athletes from the National Olympic Committees from all over the globe, finally come together in Tokyo on 23 July, it will send a powerful message of solidarity, resilience and hope to the world. You are an integral part of our Olympic community, and we welcome you with open arms.”

UNHCR High Commissioner Filippo Grandi congratulated the athletes, saying: “I am thrilled to congratulate each of the athletes who have been named in the Refugee Olympic Team Tokyo 2020. They are an exceptional group of people who inspire the world. UNHCR is incredibly proud to support them as they compete at the Tokyo Olympic Games. Surviving war, persecution and the anxiety of exile already makes them extraordinary people, but the fact that they now also excel as athletes on the world stage fills me with immense pride. It shows what is possible when refugees are given the opportunity to make the most of their potential”

The team will compete under the Olympic flag. At the Opening Ceremony on 23 July, the athletes will enter the stadium in second position immediately after Greece, sending a strong message of inclusion, and showing the world the strength of the human spirit.

The selection of the IOC Refugee Olympic Team Tokyo 2020 was based on a number of criteria including, first and foremost, each athlete’s sporting performance and their refugee status as confirmed by the UN Refugee Agency (UNHCR). Personal background, as well as a balanced representativity in terms of sport, gender and regions, were also considered.

Like all teams at the Olympic Games, the IOC Refugee Olympic Team will have its own entourage to meet all the required technical needs of the athletes. Olympian and former marathon world record-holder Tegla Loroupe will be the team’s Chef de Mission, reprising her role from the Olympic Games Rio 2016, while Stephen Pattison from UNHCR and Olivier Niamkey from the IOC will act as the Deputy Chefs de Mission. They will lead a delegation of 20 coaches and 15 team officials, while Olympic Solidarity will cover travel and all other participation expenses for the team.

The full EOR* delegation will meet for the first time as a team at the Aspire Academy in Doha (Qatar) on 12 and 13 July for their Welcome Experience, before flying to Japan on 14 July. During the Games, the team will be hosted by Waseda University, which will provide accommodation and training facilities, before the athletes move to the Olympic Village for their respective competitions. Both of these training camps have been made possible due to the support of the NOCs of Qatar and Japan.

The biographies of the 29 athletes who make up the Refugee Olympic Team Tokyo 2020 can be found here.

*The IOC Refugee Olympic Team will compete in Tokyo under the French acronym EOR, which stands for Equipe Olympique des Réfugiés.