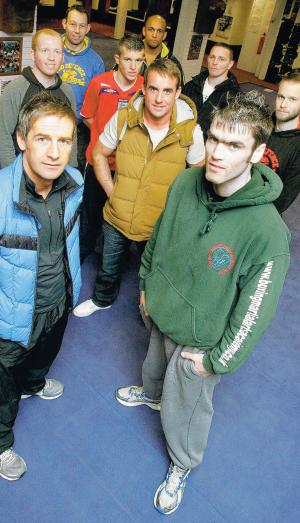 WHILE most lads on their stag dos head off for a weekend of drunken debauchery, that was never going to be an option for a world-class muaythai boxer Michael Dicks who’s preparing for both a Muaythai  Premier League fight and world-title bid.

So when Michael Dicks’ trainer and best man Paul Hamilton, President of the UKMF, the IFMA member NF representing England came to organise his protege’s party, he had to think outside the box.

On February 10, Dicks, Hamilton, and another 28 of their friends will head for the Brecon Beacons to take part in a series of endurance challenges to raise money for the National Society for the Prevention of Cruelty to Children (NSPCC).

The NSPCC’s purpose is to end cruelty to children and our vision is of a Society where all children are loved, valued and able to fulfil their potential. We campaign to change the law, provide ChildLine and the NSPCC Helpline, offer advice for adults, and much more.

For two days, the party, including fellow members of Darlington Boxing and Martial Arts Academy where Mr Dicks trains, and fighters from across the country, will tackle some of the country’s toughest terrain and potentially hazardous weather conditions.

They will be divided into two teams of 15 competing over a 31-mile bicycle ride circumnavigating the Beacons, a seven-mile kayak and the infamous Fan Dance – a 24km walk across rugged terrain carrying a 32lb rucksack used for SAS selection – only a third of participants are expected to pass the test.

The losing team will face the Royal Navy’s ice bath at the top of the mountains.

Hamilton said: “The challenge is horrendous. That’s what I wanted it to be like.

Michael has got fights lined up in the new year, so it would be silly us going out and drinking.

A lot of people in the gym would be bored if we went for a run around South Park and a kayak across the park lake.

Whether it’s fighting or just training, people like a challenge in here.”

Each participant will be paying his own way on the trip, but they are also raising money for the NSPCC.

Hamilton said: “Michael wanted to put something back because of what he has gone through. He came to the gym to help sort his life out. It’s the first time that the NSPCC have heard of something like this.”

Liz Stokoe, NSPCC community fundraising manager for the North East, said: “We are always very grateful to people who fundraise for the NSPCC.

This is certainly a very unusual and tough fundraising challenge and we wish Michael all the best in February.”

Following his stag do, Dicks will fight for a world title in March at the O2 Arena, in London, and then his final Premier League group bout the following month.

He marries his fiancee, Samantha Beck, from Darlington, on May 12. Part of the service will be held in Bangkok, before the main service and reception takes place in Koh Samui.

The WMC and IFMA would like to congratulate Michael on his upcoming nuptials and commend both Michael and UKMF President Paul Hamilton for their social contribution in the name of our beloved muaythai!