Poland’s first Khan Seminar was successfully concluded on the 17th of April. The program was divided into two sessions. The first session focussed on theoretical and practical training, with degrees from the first to the sixth grade Khan, which teaches typical Muaythai techniques i.e. (moving to position, hit, attack, elbows, knees, wrestling in the clinch). The second portion of the seminar involved demonstrations and discussions on the methods of resisting enemy attacks with knife or stick, as well as immediate self-defence techniques using the elements of Muaythai.

The course allowed participants to gain knowledge which is necessary to carrying out training courses for the degree of Khan in their clubs. The main organiser and presenter was Chris Grajek, who graduated the Khan Programme held during last year’s IFMA World Championships in Bangkok, where he received a 10th-degree Khan, which qualifies him to carry out Khan Examinations in Poland. Robert Karpinski, from the school of martial arts “Warrior” in Lodz, assisted in conducting the course. Chris Grajek conducted his classes with a high degree of professionalism, using carefully prepared syllabuses for each grade, which allowed each participant to learn easily about all the different techniques, as well as improving their knowledge in their own clubs. Chris amply transmitted and discussed specific techniques, reflecting the experience and knowledge that he gained during his training in Thailand. All participants to the course were duly satisfied with the class. Many thanks to Chris for the hard work he has done to systematize all this knowledge for instructors in Poland. 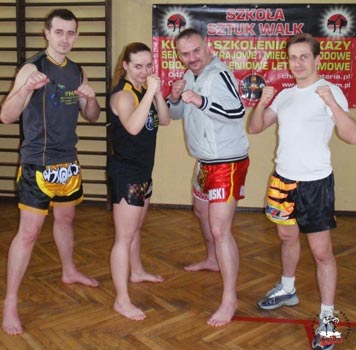 The Polish Muaythai Federation also wishes to thank Robert Karpiński, who helped with placing and assisted Chris during the training. He also led a seminar about immediate-danger attacks, and resisting the enemy when armed with a knife or bat. Robert’s knowledge is a combination of various martial arts in conjunction with Muaythai. All in all, the seminar was diverse and interesting for all participants.

The seminar was also attended by Rafał Simonides, who needed no special introduction, whom also shared his knowledge and experience.

The final highlight for the Polish Muaythai Championships was to find that for the next Polish Muaythai Championship (June 4-5, 2011), each Muaythai instructor who participated in this April course would be granted a government ID (approved by the Ministry of Sport and PZMT) which will be presented to each 6th Khan graduate by the Ambassador of Thailand. Other participants or assistants, who participated in the seminar will receive 4th Khan Degrees.